I got up at about 8 o'clock and left by 9 o'clock, By now I have developed a bit of a routine in the morning, getting ready then packing all my kit away.

I knew from the guide that there would be loads of uphill at the start of the ride, and I wasn't disappointed. I was very saddle sore from yesterday, and the skin was red raw, so I put a plaster over it which, it turned out, made it even worse.

I climbed out of Burgohondo and through a small village. The road I was supposed to go on was a single lane road over a mountain, but this was closed to all traffic for roadworks. With all the roadworks going on in Spain, I was bound to have this problem sooner or later. I was tempted to chance it, in the hope that I could do some offroading if required, but if the roadworks were at the top then there would be nothing but the road or a sheer drop, so I instead checked my map to make sure the diversion didn't take me onto a motorway.

After 15 minutes I came to the road which would take me over the top. It wasn't quite a motorway, but it was very fast and very steep, and the cycle lane was rather narrow in places. There was no tree cover, and it was extremely windy. Cycling along this road was really scary, probably the worst day's cycling I've ever experienced. I nearly lost control of my bike a couple of times, and I was really worried about coming off. 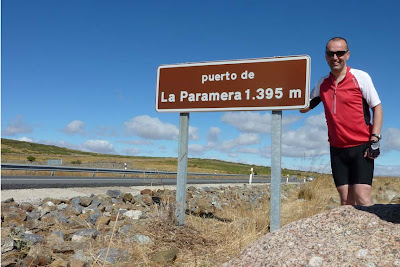 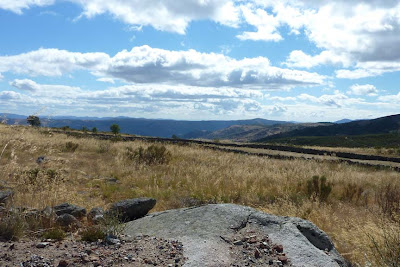 I stopped at the top - Puerto de la Paramera - and had a break, then I continued on my way down. Again, the wind was a big problem, and I had to brake all the way down to keep my speed to 15mph; any more and I was getting blown into the path of oncoming traffic. And my saddle sore was killing me.

I made it into Ávila for about 1 o'clock. I could recall the way to the hostal from memory, as it had been tricky working it out on Google Maps. I checked in, andparked my bike out in a courtyard at the back of the hostal. Once in my room, I squeezed myself into the tiny bath to soak the angry red skin where the plaster had been rubbing, before washing my kit and hanging it up to dry.

A few weeks before my trip, I had decided to have a massage either in Ávila or Segovia, and I'd found a really promising massage clinic in Ávila called Fisioterapia Armonía and I'd made a 5 o'clock appointment with Carmen. The clinic was situated outside the main city centre so I took a cab. There were no cabs passing on the street so I had to book one by phone in Spanish. Fortunately the lady in the cab office and I understood each other without having to repeat ourselves too many times, and I got there with 15 minutes to spare. Carmen's English was way better than my Spanish, and we conversed in 'Spanglish'. After all the cycling I had been doing, my muscles were really tight, and Carmen was quite brutal with me, but I really needed it. Afterwards she told me "Today you'll hate me, but tomorrow you'll love me!" She was right about the first bit and I hope she's also right about the second bit.
After my massage I popped into a nearby pharmacy and bought some painkilling cream for my saddle sore, then ordered a cab to take me to the aptly named 'Bicicletas Miguel' bike shop, which was located a short walk outside the main City walls. It was such a relief to get a new chain, as I'd become paranoid about my chain breaking again, which would have been a big, big problem without any spare quick links. Unfortunately, they didn't have any shorts in my size, but since I'd cut all the loose stitching back it hadn't started to unravel again, so I could be OK.
I took a walk back to the hostal, and stopped at a supermarket for some water and bananas (I'm really getting bored with bananas now, but there's not much else in the way of energy foods). I also treated myself to a litre bottle of Mahou beer. On leaving the supermarket I walked past a charcutería with lots of cooked meats in the window. Temptation got the better of me and I went in and asked for 100g of the best jamón ibérico. The guy sliced some off and put it on the scales, and weighed a bit over. I tried to say that in Spanish and he thought I wanted some more, slicing off another 50g before I could stop him. Shit happens!
I got back to the hostal without making any more random purchases, and was planning a proper tapas evening where you have a beer and a tapa in a bar and then move onto another bar. I started off in my room, making short work of the jamón, which was delicious, and the beer.
I wanted to go up onto the city wall. I knew that it shut at 8 o'clock and it was now nearly 7:30, so I went over to the gate and the lady told me that I wouldn't have time to walk the length of the wall and that I'd have to come back tomorrow. I managed to persuade her to let me in, promising that I'd be down by 8 o'clock, and went up to the top. The brickwork was in excellent condition - almost too good, and Trigger's broom sprung to mind. The weather had become very overcast by now, and it was trying to rain. The view though was great, and I could make out the mountain I had climbed and the road I had descended on into Ávila a few hours earlier. After enjoying the view, and taking some photos, I went back down and headed off in search for some tapas bars. 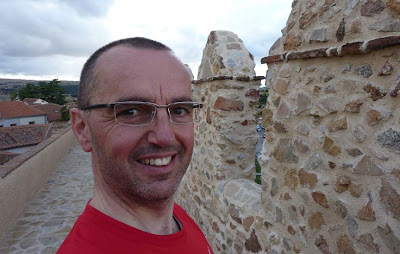 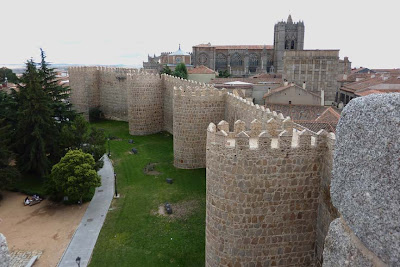 I went outside of the city walls and followed the flow of people who looked like they were going out for the night. I found an old tapas bar 'Bar Crisol' and parked myself down at the end of the bar, ordering a beer and some chorizo al vino. The owner was clearly a bullfighting nut and had loads of memorabilia hung up on the walls, along with loads of 'look at me' photos of him with different bullfighters. I wasn't fussed by the chorizo, but the beer was good so I had another.
I stayed in there for a while, reading the local paper and listening to the conversation of a group of workmen stood near me. I didn't have a clue what they were talking about, and I find it so frustrating. I guess I just need to practice more and watch more Spanish TV on the web. 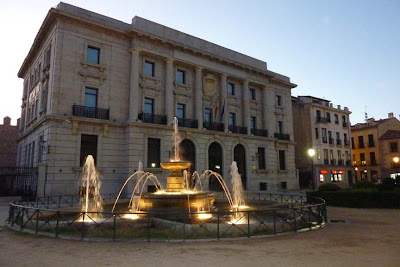 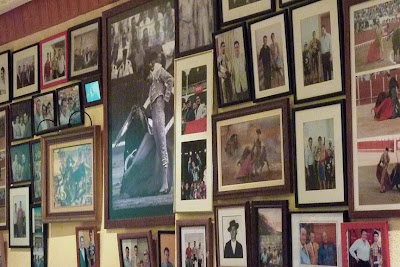 Then I remembered that Spain were playing Argentina at football that evening. From what I'd been able to make out on TV, this was some kind of challenge/grudge match and it wouldn't be the sort of friendly where the reserves play. The Spanish first team squad had flown out to Argentina and players like Xavi and Casillas seemed like they were up for it. So was I! I enjoyed watching both teams play in the World Cup, so my 'ir de tapas' would have to wait until Segovia or Madrid. There was no football on the TV in the bar so I went in search of a bar that was showing it. I found one nearby bar that did have the footie on, but nobody seemed to be watching and it was a bit of a crappy bar, so I left without buying a drink and decided to find an old traditional bar in the old town. I soon found a bar that was showing the footie. There weren't many people in there, but it meant that I could get a stool by a table, and the game was just about to kick off, so I ordered some tortilla and a a glass of red. 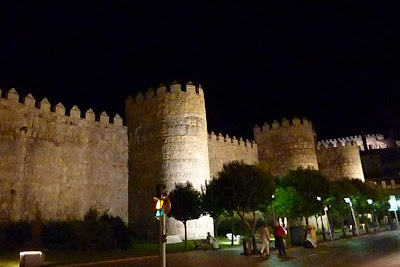 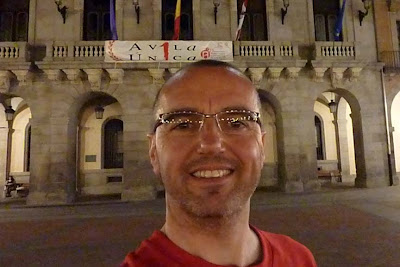 Things went pear shaped for Spain quite quickly. Messi scored after 10 minutes and Higuaín got a second a few minutes later. The game was pretty much over when Tévez scored a third just before half time. The game had become a dull affair, so I left the bar about 15 minutes before the end. It turned out that I missed a couple of goals as the final score was 4-1 to Argentina. I walked back in the general direction of the hostal, not knowing exactly where I was, and I'm glad I did as I found the Plaza Mayor by accident. I stopped and took some photos, then made my way back to the hotel.
Posted by WickmanUK at 23:59

New comments are not allowed. 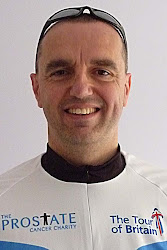